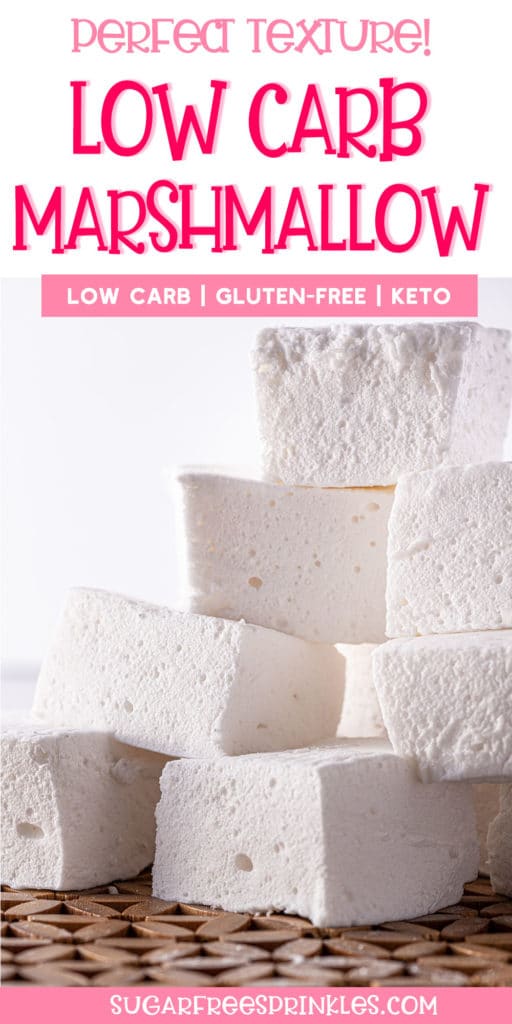 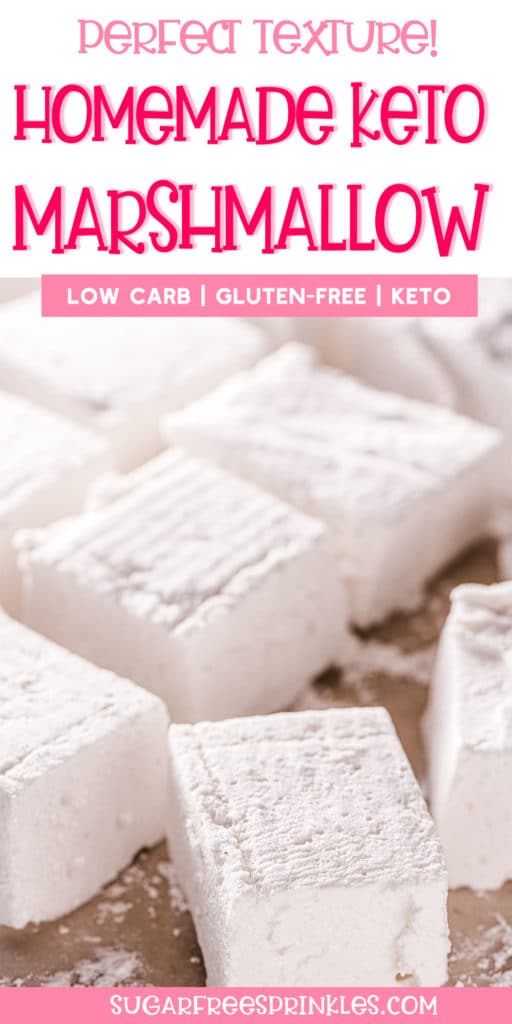 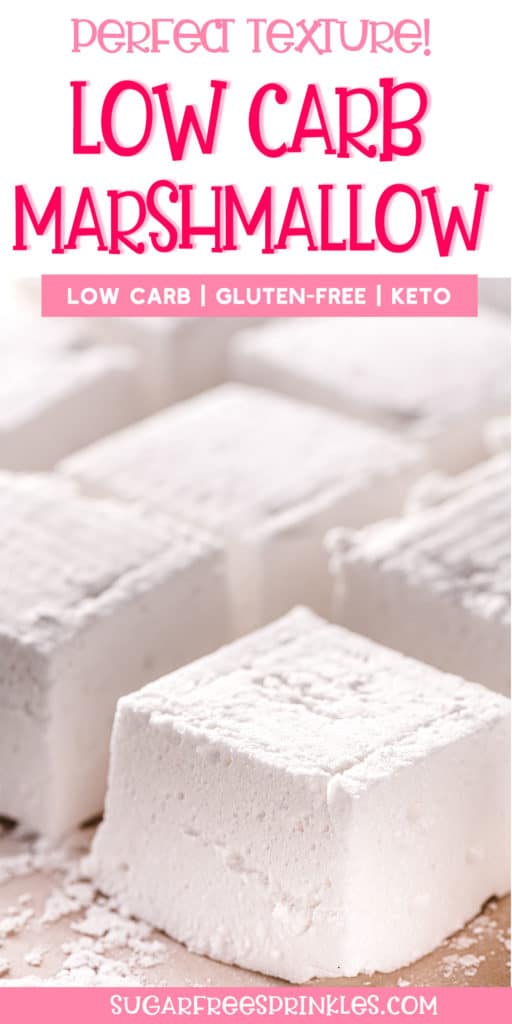 I know folks hate stories, so I will make this one short.  When I lived in Vancouver, there was a bakery called ” Butter.”   They had the most incredible homemade marshmallows.   I loved them.   Butter also had a cookbook (amazing cookbook I might add) that had their famous marshmallow recipe that I rediscovered last week.  I started thinking – would this recipe work with allulose?  YES, the answer is YES, yes it worked. These keto marshmallows are the adapted recipe without sugar or corn syrup, and I dare say they are just as good as the real thing.  (told you it would be a short story) 😉

I had to give credit to Butter because their recipe was the inspiration for this sugar-free version.

Seriously, you need to make a batch of these things. They are SOOOO good.

Low Carb Marshmallows – You won’t believe how easy they are to make!

Ok, these marshmallows don’t have any carbs.

Made only with gelatin and allulose, the carbs come out to a big fat zero.  Unflavoured gelatin has no carbs, and Allulose is net zero.

I get a lot of emails about Allulose because of the packaging label rules.  Allulose is not metabolized by the body.  Unlike sweeteners like xylitol or malitol (the worst), it does not spike blood sugar.  It also doesn’t have the same impact on the gut as some sweeteners do. If you’ve been eating low-carb or keto for a while, you know what I am talking about.

With all that said, I don’t give health advice.  I recommend to everyone that if you’re trying new sweeteners, find the one that is right for you and your personal dietary needs.

I like allulose because it doesn’t spike my blood sugar and doesn’t make me bloat out like I am 9 months pregnant with triplets, but I also really like it because of its similar properties to sugar.  Oh and, it doesn’t kick me out of ketosis either.  So as a sweetener, it’s a win-win-win.

Back to my original point  – this recipe is SUPER easy,  zero carbs,  and I swear these marshmallows taste 95% like the real thing.   I mean, I can’t say 100% because sugar tastes like sugar, nothing tastes exactly like sugar, but I mean it’s so close!   But I can tell you the texture is dead-on, it’s 100%.

Sweeteners for this recipe

Allulose.  That’s the sweetener you need for the marshmallow recipe.  Allulose shares many properties with real sugar.  It thickens when heated, turns to syrup, caramelizes, and browns in almost the same way as sugar.   Other sweeteners do not have the same properties.

For this recipe, we need to whip heated sticky syrup to get the fluff and volume that we need for the marshmallows.  Many low-carb recipes use eggs to achieve this, but marshmallows do not have eggs in them, and you can tell the difference between gelatin and eggs in a marshmallow recipe right away.  The air bubbles are tighter, the squish has a bit of resistance, and the marshmallows taste better (In my opinion!).

So for this recipe, it’s allulose, or you’re making a different recipe.

For rolling the keto marshmallows after cutting, you can use powdered erythritol (I used Surkin Icing) monk fruit, or a blend.   Toasted coconut works well too, and I have instructions for that for you down below.

Homemade keto marshmallows seem like they would be a real time consuming difficult thing to make, but it is super easy.

When you add the water to the gelatin, it’s going to look weird.  The gelatin will clump up and look like a pile of goo.

The allulose and water will get cooked over a med-low burner until it reaches 230-240F.   OR, if you do not have a candy thermometer, you only need to cook the syrup for a minute from the time it starts a rolling boil.  That’s it.   Turn the stand mixer on, and gently pour the hot syrup into the mixer and turn it on.   Walk away for 9 minutes.  Make yourself a cup of coffee. You deserve it.

At the 9 minute mark, come back and add the vanilla.

At the 10-12 minute mark, the marshmallow mixture should be fluffy and light.

Signup for our newsletter and receive access to our four essential baking guides.   Print them off and keep them handy in the kitchen!

Once the Marshmallows are set, pull off the plastic wrap and use a knife to loosen the edge away from the pan.

The keto marshmallow slab should release from the pan very neatly, if it is stuck, just give it a gentle pull and plop the whole thing down into a pile of powdered sweetener.

Use a sharp knife to cut the marshmallows and dip them in powdered sweetener as you go.

Oh, now we get to the good bits.   You can create ALL kinds of crazy variations for these marshmallows.  I’m going to drop a few of my favourite varieties, but the sky’s the limit here.

Toasted Coconut:  Toast 3 cups of unsweetened coconut and toast in a 350 F  oven for 15 minutes or until golden brown.   Add 2 Tbsp of your preferred powdered sweetener and blend it.  Use this mixture to coat the marshmallows instead of the powdered sugar-free sweetener.

Coffee:  Substitute the water in the recipe with coffee!  (This is my husbands’ favourite version)

Double chocolate:   Make a batch of chocolate marshmallows.  When they are cooled, dip them in Lilly’s melted dark chocolate.   These make great treats on a stick.

These are just a few ideas.   You can do all kinds of things with this keto marshmallow recipe.     I will be testing all sorts of crazy stuff in the coming weeks to see how these marshmallows hold up when baked.

Store these keto marshmallows store well when sealed in a bag or a container.  No need to refrigerate, they hold up well stored at room temperature, but you can toss them in the fridge.    They do not freeze well, so I do not recommend it.   Since the carb count is SO low, I imagine a stack of these will be gone in no time flat.

They melt just like the real deal in hot chocolate, and you can toast them just like real marshmallows too!   Allulose does tend to burn quicker than sugar, so my advice is to go slow when roasting.

As an Amazon Associate and member of other affiliate programs, I earn from qualifying purchases.

Nutritional information for the recipe is provided as a courtesy and is approximate only. We cannot guarantee the accuracy of the nutritional information given for any recipe on this site. Erythritol carbs (and sugar alcohols) are not included in carb counts as it has been shown not to impact blood sugar. Net carbs are the total carbs minus fibre.

Did you make this recipe?