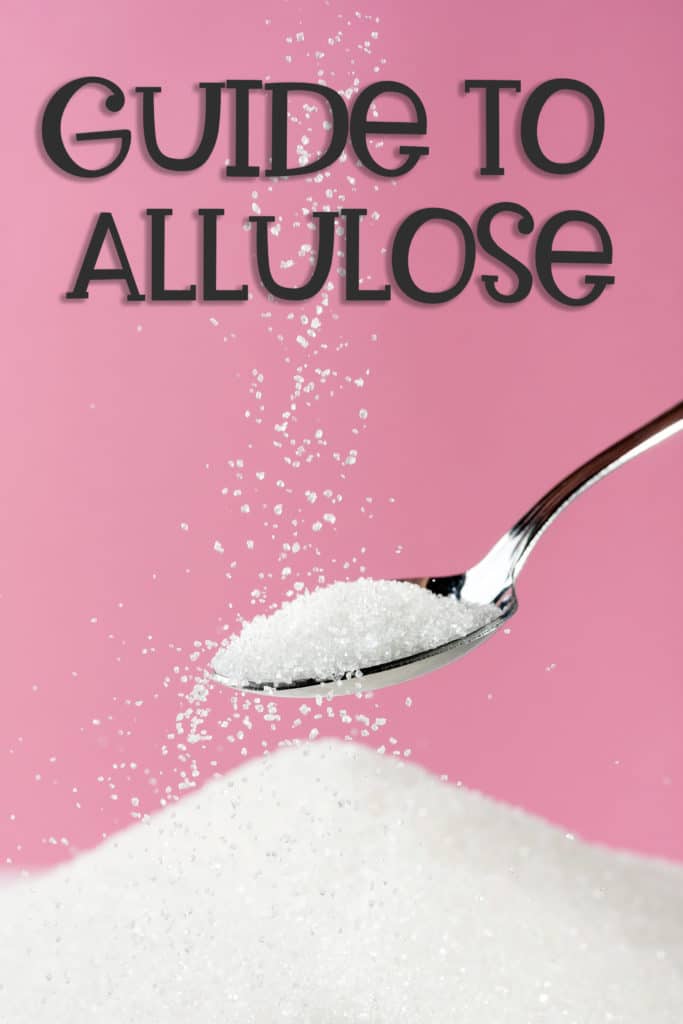 Allulose is a sugar sweetener that all the bakers out there can use in place of standard sugar. Here are all the fun facts, special dessert recipes, and everything you need and want to know about this sweetener!

While living on a low carb diet, many people tend to come to the conclusion that they no longer are able to have any sort of sweet treat and dessert again. But, that’s not true! There are many sugar substitutions you can use when you are baking or cooking that can easily fall in line with your diet.

It’s true—there is a way to enjoy a yummy sweet treat every once in a while and still maintain your health. You can keep all of your sugar and insulin levels where they need to be and have a cupcake. Win-win!

Today, I am going to be sharing with you all a sweetener that I frequently use in many of my dessert recipes: allulose.

With so many misconceptions out there on the internet, I wanted to take a moment and share some helpful information I have learned about allulose and other types of sweeteners that can replace regular table sugar.

With that being said, here are a few questions I get from readers about allulose.

Allulose (also known as D-psicose) is a kind of sugar that is typically used in a low calorie/ low carb diet. It can be used as a sugar replacement to lower the sugar content for those who are on the keto or diabetes-friendly diet.

Allulose has a nice sweetness to it, just like regular white table sugar. Thankfully, it doesn’t have any weird after taste!

How Is Allulose Made?

Allulose is known to be a monosaccharide (also known as simple sugar). This type of sugar is not metabolized by the body like standard sugar is.

Fun Fact: Allulose has the same chemical structure as fructose, another type of simple sugar! Unlike fructose, it is actually absorbed by the body into the blood so it is considered to be a low-calorie option (sometimes even zero calories!) and not used for energy.

It has also been shown that this sweetener can be made by converting fructose from corn and some other plants.

What Is The Nutritional Value of Allulose?

Is Allulose Considered To Be Natural?

Somewhat, yes. This kind of sweetener is what is known as a “rare sugar”, which can be found naturally and in small quantities in various ingredients such as:

Is Allulose Safe To Consume?

A couple of years ago, it was added and identified by the FDA (The United States Food and Drug Association) as safe. Although, you won’t find it listed under added sugars. You will actually find it labeled as a carbohydrate!

This is because of its chemical structure (which I mentioned above under how allulose is made).

With that being said, I recommend using this sweetener wisely and not consumed in large quantities because it is not absorbed in the same way glucose would be.

Is Allulose A Sugar Alcohol?

No, it isn’t. Since allulose is actually a simple sugar, it is considered as such.

Yes! With its low calories and the way it is absorbed, it is considered an amazing option for those who are following the keto diet.

It can be used to sweet baked goods, sauces, coffee, etc.

Does It Raise Blood Sugar Levels?

No, quite the opposite actually.

Many people who have diabetes or watch their blood sugar levels use allulose to help sweeten some of their food.

According to Healthline, it has been found to help naturally lower blood sugar and the risk of developing type two diabetes by protecting some of the insulin-producing cells in the pancreas which is very important for a healthy body.

Can You Bake With It?

Since allulose tastes and acts like table sugar, it works perfectly in a lot of baking recipes. And, with it being a low-calorie substitution for sugar, it can be used in a lot of keto or low-carb recipes when it calls for something sweet.  Allulose will caramelize, thicken, get sticky, and will not crystalize when cold like many other sugar substitutes.   For this reason, it’s a really great sweetener for low carb baking.

Where Can I Find Allulose?

Now that it is becoming more popular, many companies that produce monk fruit and stevia products have started selling allulose in bulk for many people to use in their own homes.  If you are outside of the US it is possible that Allulose has not yet been approved in your area.   Canadians, for example,  will find Allulose very difficult to find as it is still going through approval with Health Canada.

However, most online low carb grocery stores in the US do have it for sale. You can also easily find it on Amazon.com.

I’ve tried many different brands and they all seem to be the same, so look at the prices before you buy.

Recipes To Make Where You Can Use Allulose

Since you can use allulose as a replacement for sugar in baking, you can replace it at a 1:1 ratio with table sugar in many recipes.

Want to give it a try? Here are a couple of recipes where I have used allulose in the recipe because it was the best choice.   These are recipes that really shine when allulose is used as the sweetener.

This yummy Keto caramel sauce is awesome on top of some delicious low-calorie ice cream and muffins!

To make this caramel sauce, you need:

… and a few other ingredients to make this topping sauce. It tastes exactly the same as regular sugar-laden caramel sauce.  Thick, gooey, and no graininess.

Who doesn’t love a tart and lemony slice of cheesecake on a hot summer’s day? Even better, it doesn’t have refined sugars- it has a couple of low-calorie sweeteners!

In the meringue part of this recipe, it contains egg whites, a little bit of vanilla and some allulose to give it that hint of sweetness it needs.   Because allulose was used in the lemon curd, the cheesecake can be refrigerated without worrying about it crystalizing.   Also, since we used allulose in the meringue,  you can toast it just like you would meringue made with sugar.

We all remember this childhood favorite as being that fun, fluffy sweet snack to sneak afterschool. What we don’t remember (or likely acknowledge) is all of the sugar it contains.

With this keto marshmallow recipe, you can replace the table sugar with allulose to make the sugary syrup you need to make this treat.

If you didn’t know store-bought jams and jellies can be full of a lot of unnecessary sugar and send your blood sugars through the roof.

With this strawberry jam, I tried so many different sweetener options but allulose was the best one to use in this recipe. Not only did it have the traditional sticky, jam-like texture, but the flavor was on point!

I used 1 1/3 cup of allulose to make 5 (8-ounce) jars and you honestly can’t even tell the difference. Actually, it tastes even better!