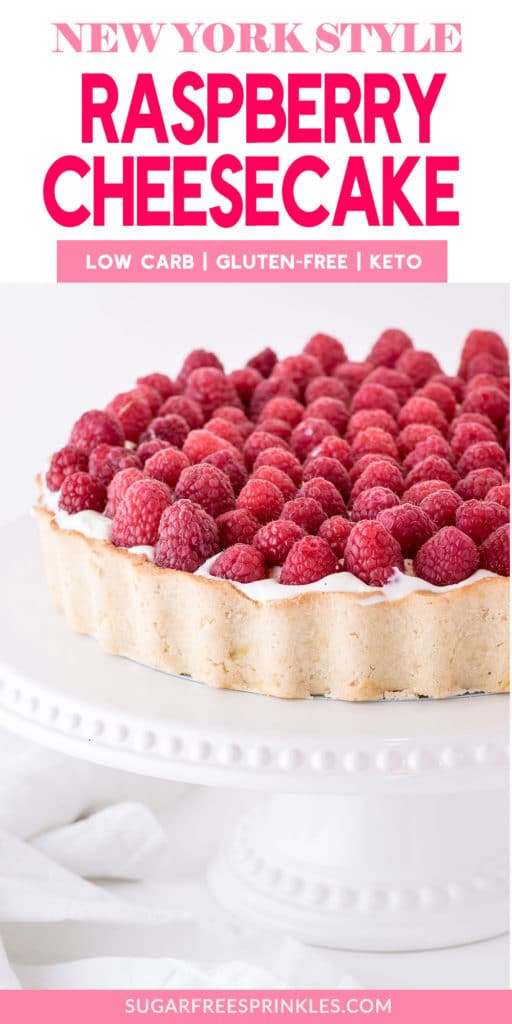 Want a “Wow!” dessert for your holiday table this season?  This low carb raspberry cheesecake recipe might be the one.

This cheesecake recipe is luscious.   That’s the best word to describe it.  It’s also dense and creamy with the texture or an old-style New York cheesecake, only with a raspberry twist.

This raspberry cheesecake has eight net carbs per slice.  That’s a bit heavy, but there are options in the notes of the recipe card to reduce the carb counts by alternating or replacing a few ingredients.

As written this cheesecake recipe is: 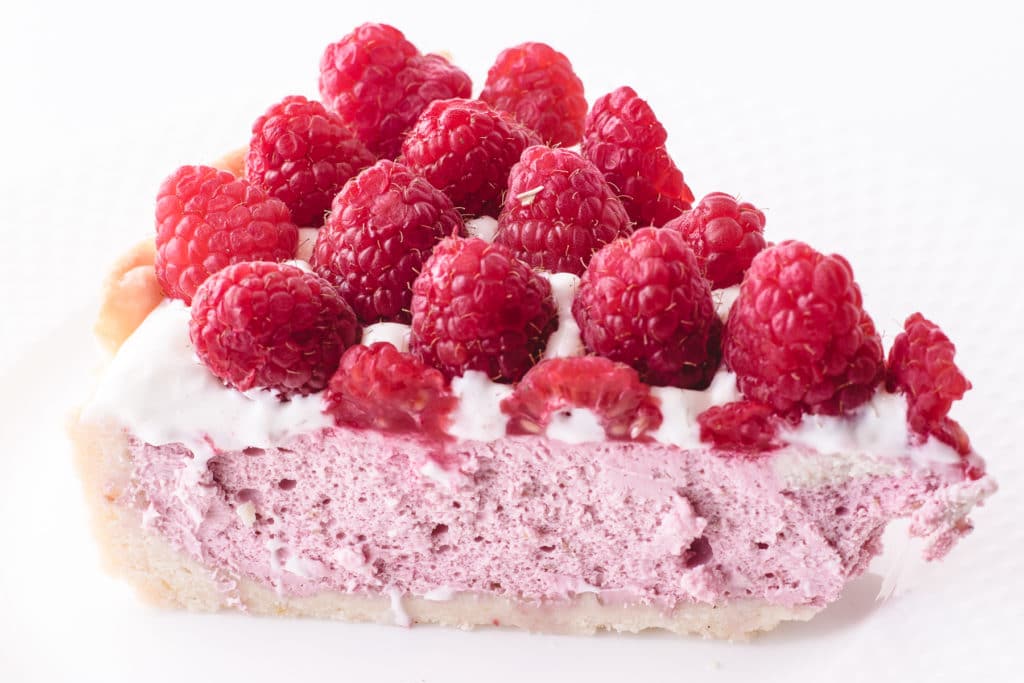 This gluten-free raspberry cheesecake is the type of recipe I reserve for holiday meals or large engagements.  It’s a recipe that serves 14 and can be made in advance and frozen.  Bonus right?  All kinds of tips and tricks at the bottom of the post to tell you the best ways to freeze in advance.

It’s also a beautiful dessert.  I have this thing for pink sweets, I don’t know, I’m weird, but this one was actually over the top pretty.  Most raspberry cheesecakes have a vanilla base, but adding the raspberry powder to the filling added such a beautiful colour to the entire dessert.  I think the layers of pink and white add that extra bit of wow. 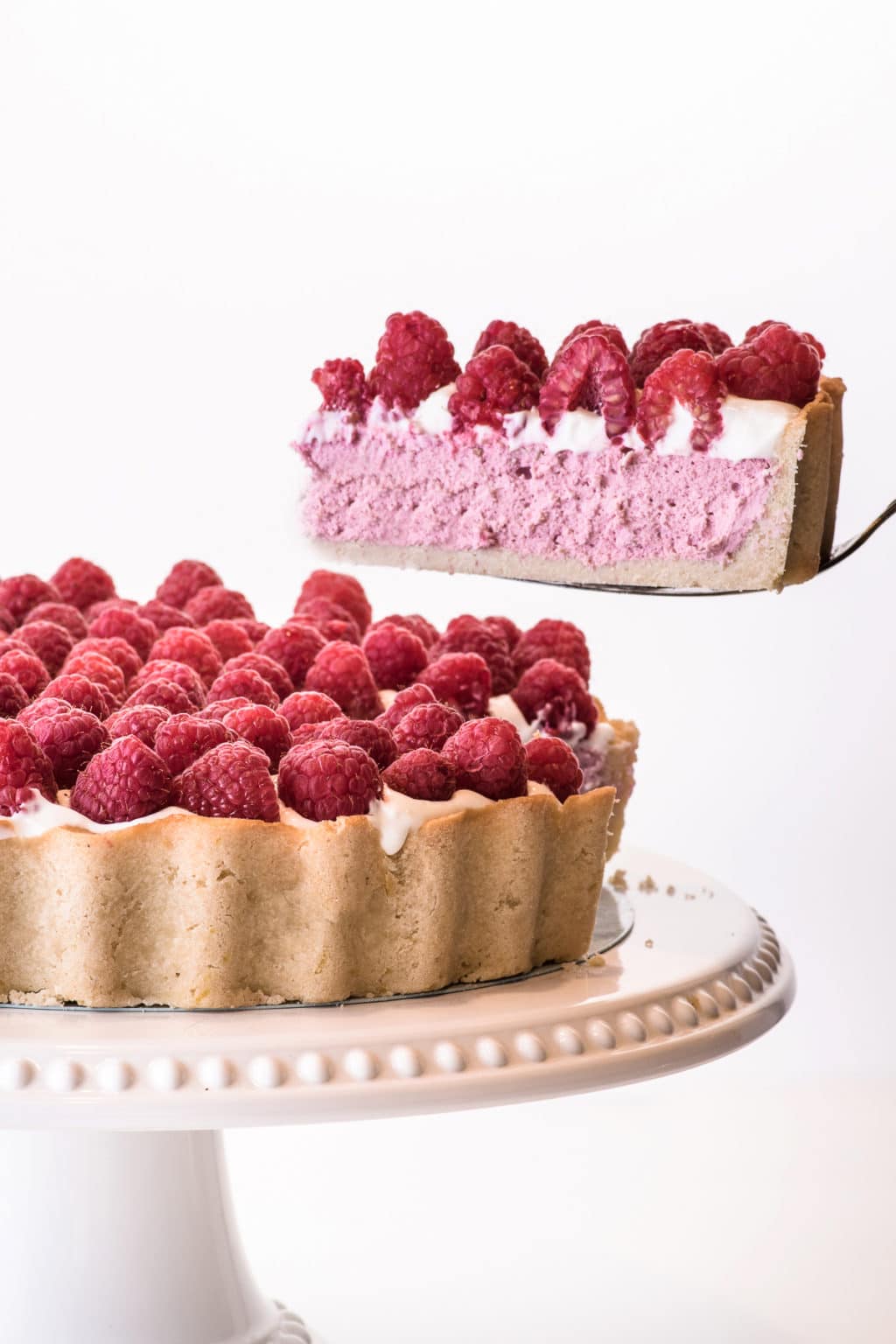 A bit about the crust

This crust is made entirely of coconut flour.  The coconut flavor is there, so for those of you who love coconut, this is the crust for you.  It’s buttery, soft, and pairs very well with the raspberry filling.

There are a few tricks and tips to get this crust perfect every single time.

When you pull your ingredients together, it’s going to look sticky and gooey, and not at all like traditional crust.  It’s ok, it works!

You also do not need to refrigerate this dough, as soon as you have it mixed up to can press it into the pan. 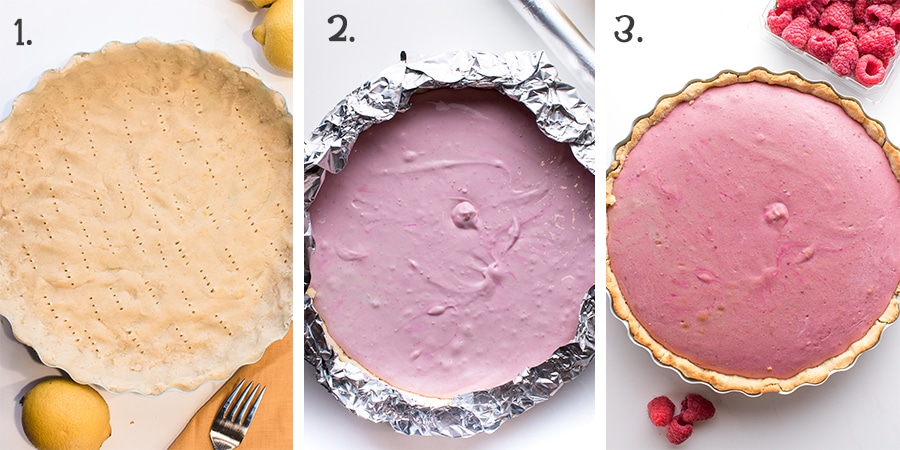 Options for the raspberry filling

So for this recipe, I wanted a huge pop of raspberry flavor in the filling, so I went with freeze-dried raspberries.  I pulverized mine and created a raspberry powder.

So why use raspberry powder instead of fresh raspberries?  Moisture.  You add a big punch of flavor without adding any additional moisture, keeping the cheesecake dense and creamy, just like a traditional New York style cheesecake.

A soft cheesecake is not a bad thing, a soft, creamy raspberry cheesecake sounds great too.

Keto option (save some carbs with flavor oils)

Alternately you can use a raspberry flavor oil or a raspberry emulsion in place of the fresh raspberries or raspberry powder.  A raspberry flavored oil or emulsion would save a considerable amount of carbs in this recipe.  I have to admit that I really really like most of Lorann’s flavored oils and the berry emulsions from Loranne’s always seem spot on to me.   Either will work great.  The oils are super concentrated so a small bit goes a long way.

Change the cheesecake base to vanilla

Your other option (look at all the possibilities!), is leaving the plain base vanilla and using fresh berries on the top.  The cheesecake would still be fantastic.  Plus no one will even know you skipped the raspberry in the filling.

I will leave links for the freeze-dried berries, oils, and emulsions in the recipe card. 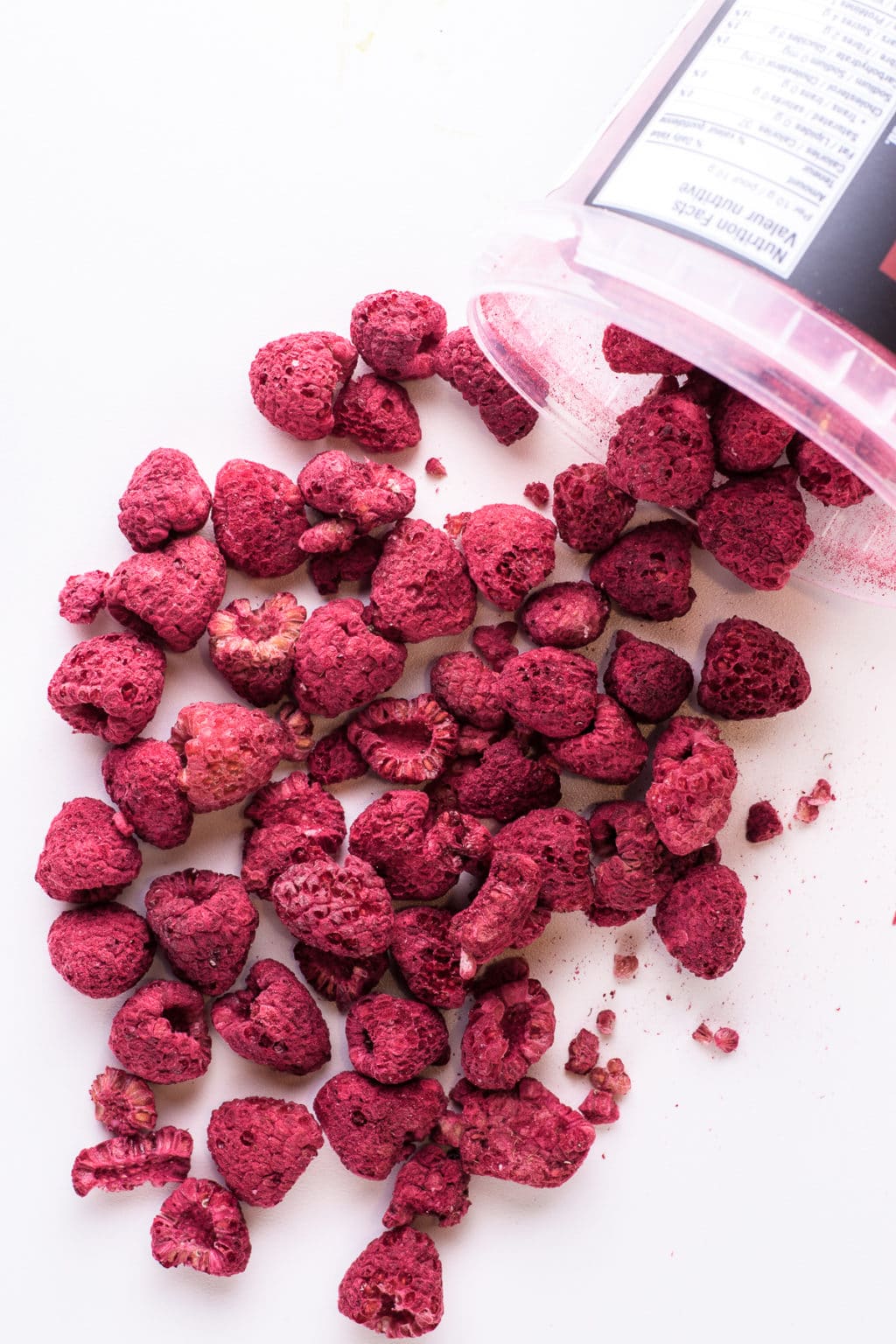 What are the best sugar replacements for this recipe?

Use your favorite 1:1 sugar substitute.

Powered is preferred over granular, as it blends better and has a more delicate texture. Erythritol and xylitol also tend to get grainy when cold, but I found the powdered versions to do it much less.

If you don’t have powdered erythritol or xylitol and only have granular, go ahead and give it a blast with a high-speed blender, or food processor.

My favorite powdered sweetener by far is So Nourished Monk Fruit Blend; I find it has almost no aftertaste at all.

Swerve, Truvia and stevia will work perfectly fine here as well as does any powdered erythritol or xylitol brand.

Allulose will also work great in this recipe.

** Remember, xylitol is poisonous to dogs and cats, so if that’s your choice and you have little furry friends running around, be aware that it can be deadly for them.** 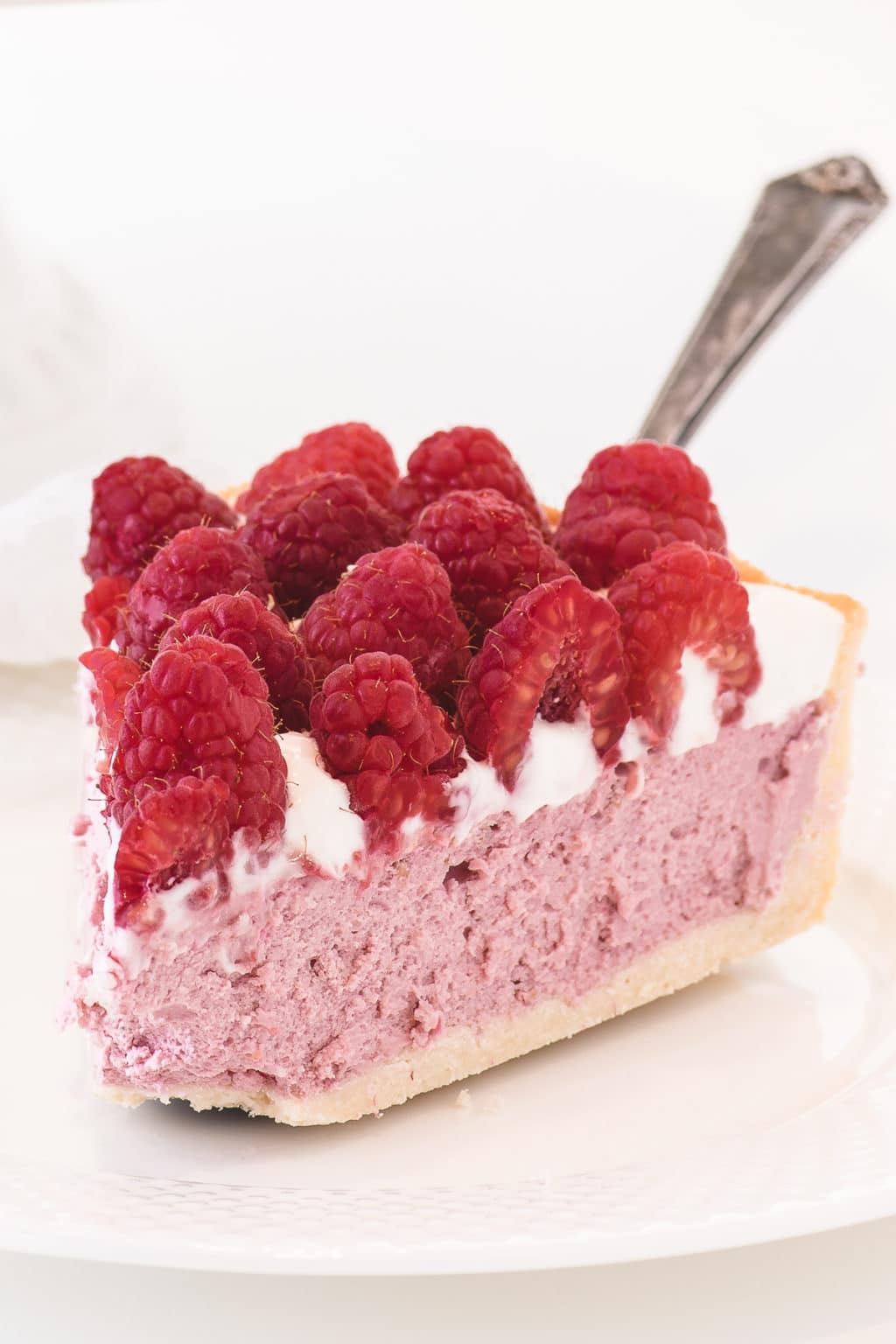 A bit about the toppings

I usually leave off sour cream toppings because the sour cream does add a few extra carbs.   I would say if this is a dessert you are making for a holiday meal where you want to impress, keep the sour cream.

Each slice of this low carb raspberry cheesecake has eight net carbs.  I mean it’s not terrible, but it’s also about 1/3 of my total carb allowance for the day.  I would make an exception on holiday, and it’s far better to have a great dessert with eight carbs, over a great dessert with 50.   So you can decide if the sour cream is worth it or not.

It’s worth it (I asked myself, and I said yes).

The sour cream topping is lightly sweetened, and a tiny bit of vanilla is added to give it that delicious creamy flavor.

You also need three full cups of fresh raspberries for the top.   Frozen raspberries will not work; they will defrost and make a watery mess on top of your cheesecake. 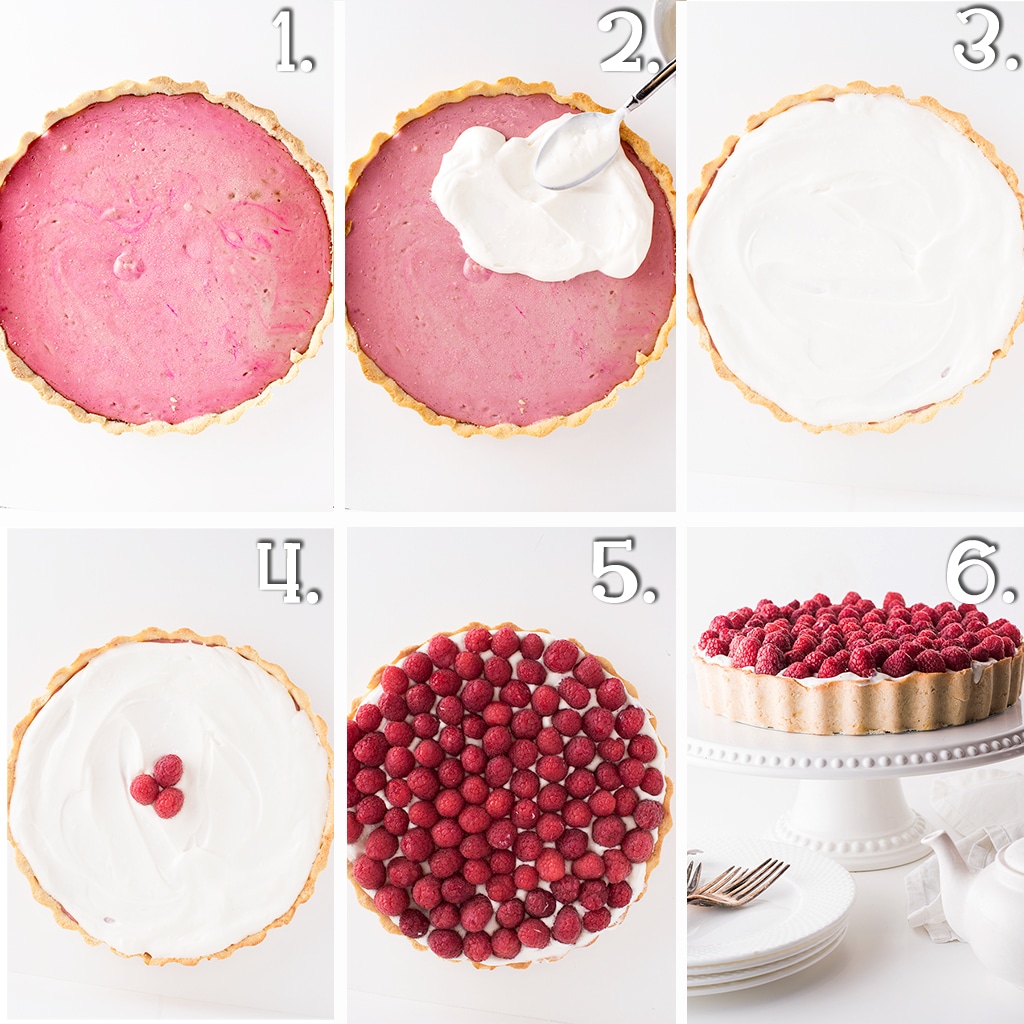 Keep the low carb raspberry cheesecake refrigerated and covered. This one only lasts about 3-4 days in the fridge and is dependent on how fresh the raspberries were. I find fresh raspberries have a very short shelf life.

This recipe is a great holiday dessert for a crowd.  The perfect kind of dessert that satisfies without a load of sugar.  It is a very rich dessert so a small piece will be more than adequate, especially after a big meal.

Ok, so if you want to make this low carb raspberry cheesecake for a holiday meal, you are in luck.  Both the crust and the cheesecake freeze beautifully.

To freeze just the crust prebake it for 5 minutes, let it cool, and store it in the freezer for up to a month.

For the whole cheesecake, bake, cool and freeze without the toppings.   Defrost in the fridge overnight and add the toppings once the cheesecake defrosts. 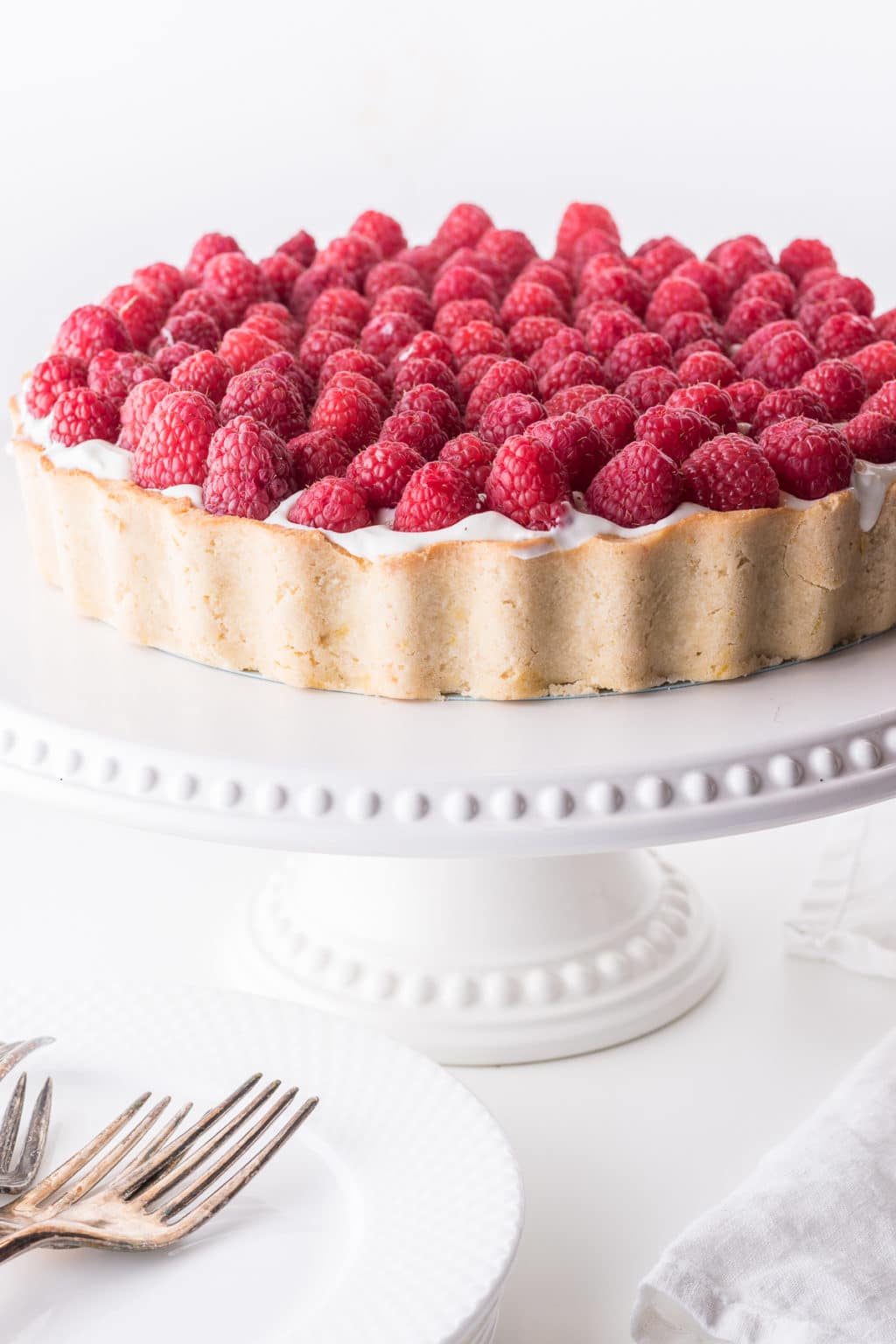 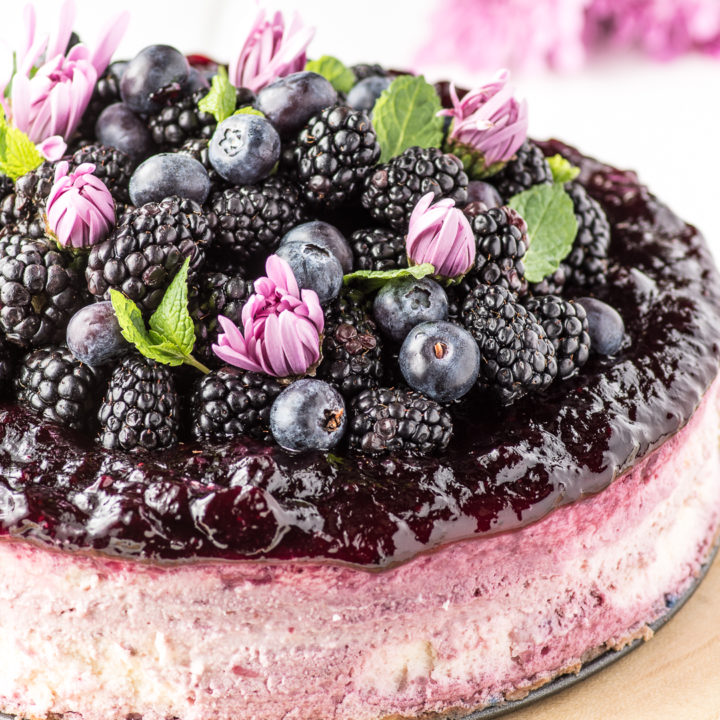 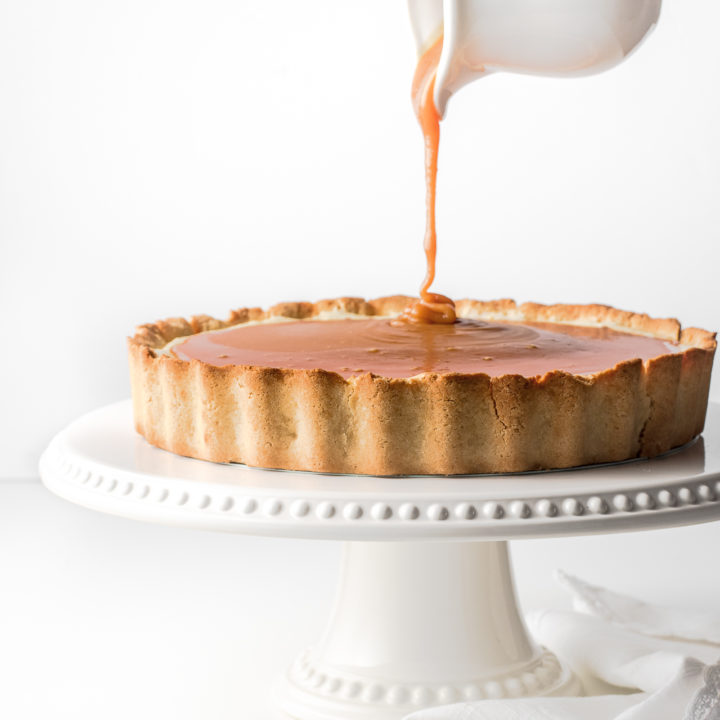 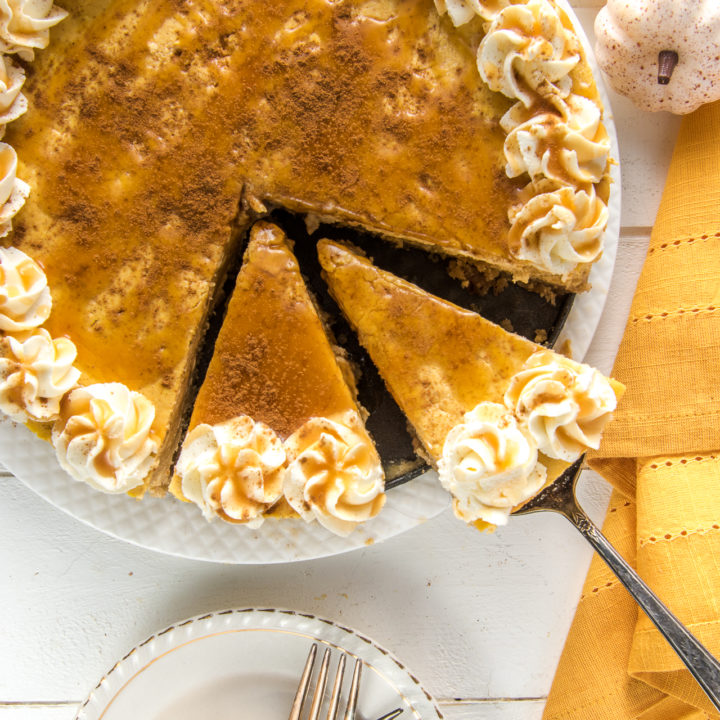 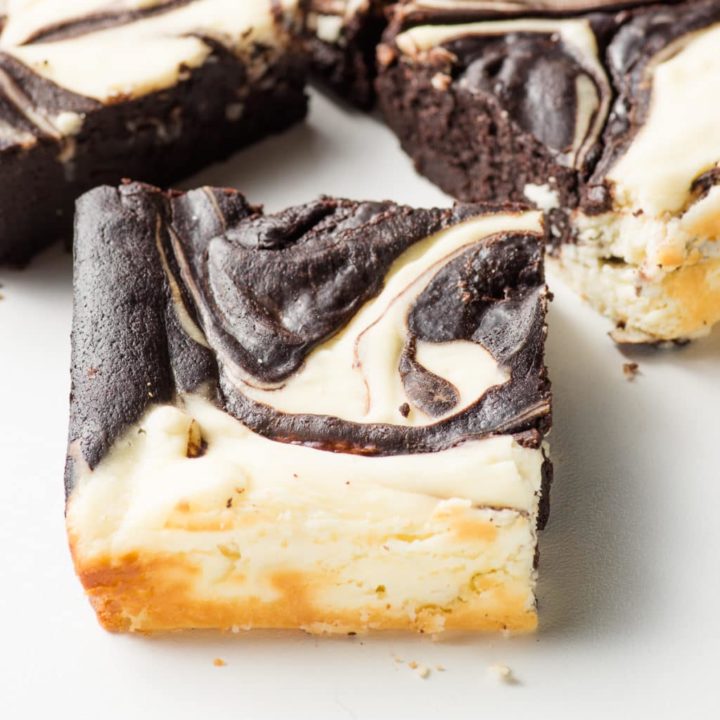 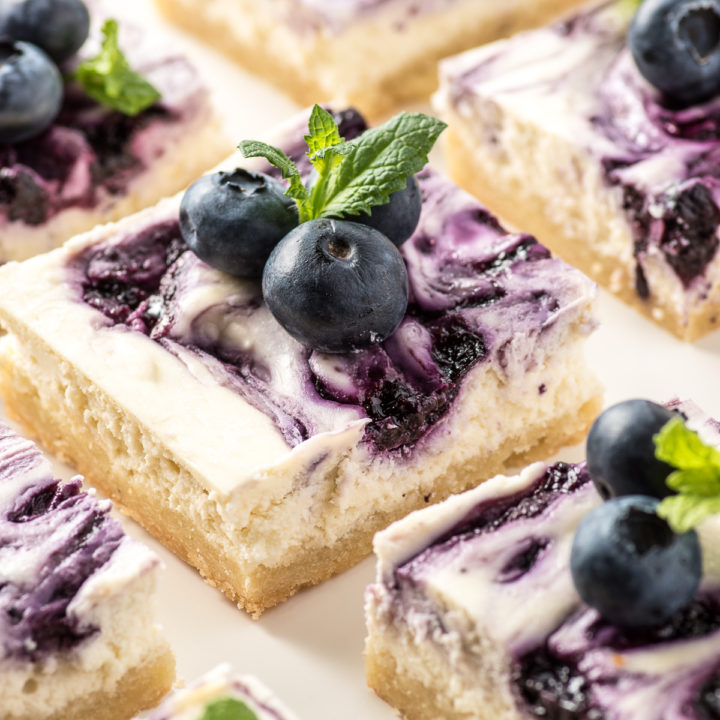 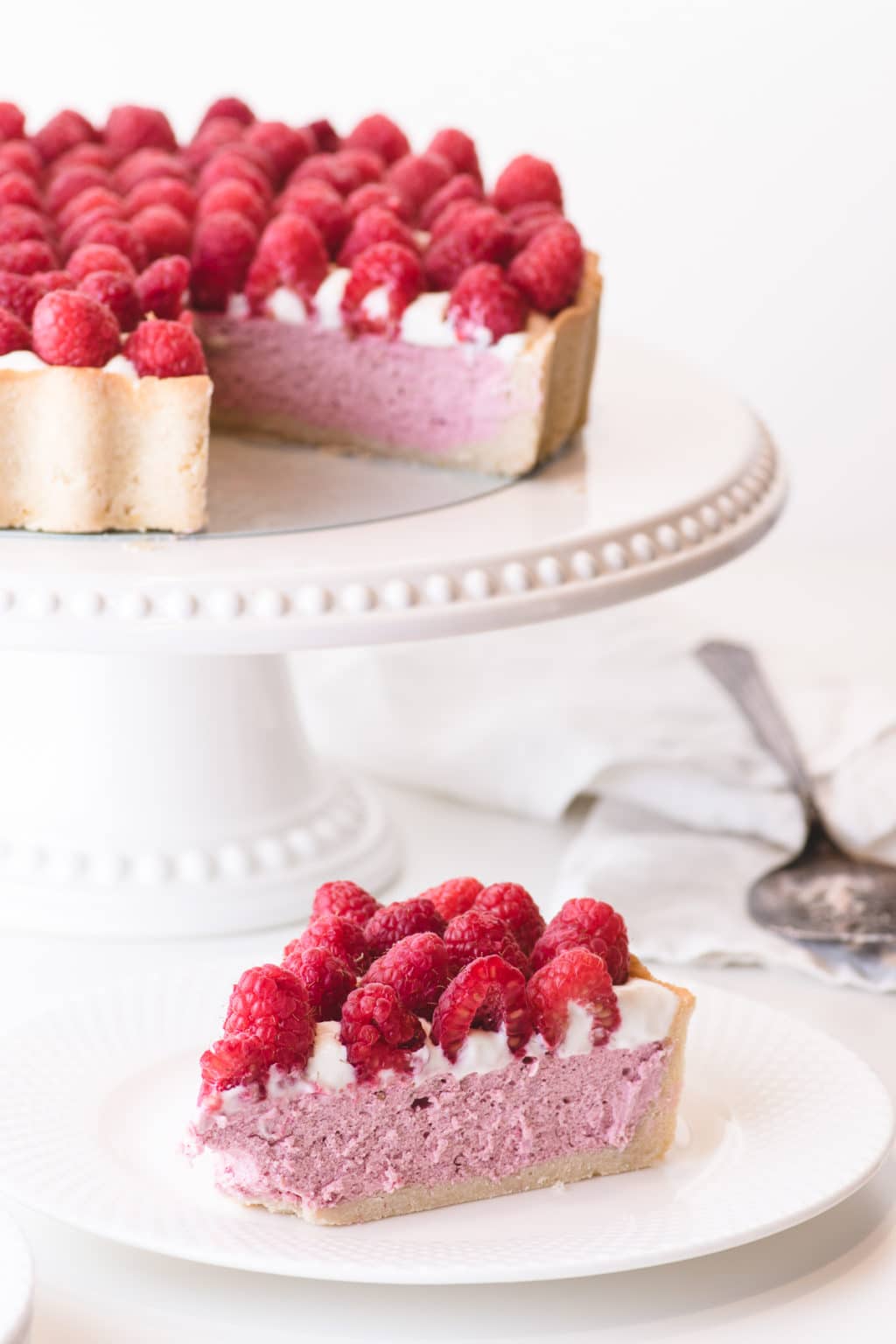 2. Spoon sour cream mixture on the top of the cooled cheesecake and spread to the edges. Make sure the sour cream is spread evenly.

3. Start in the middle of the cheesecake and place a raspberry. Continue to place raspberries around in a circle until the entire cheesecake top is filled with fresh raspberries.

1. You can use 1 cup of fresh raspberry puree in place of the half cup of freeze-dried raspberries. It creates a softer cheesecake, but the flavor is still pronounced.

2. You can use a raspberry emulsion like Lorann's. It adds no carbohydrates to the recipe, and the flavour is spot on. If you wanted your cheesecake to be pink, you would need to add a touch of food colouring to get the same effect.

3. You could leave out the raspberry all together, and make a traditional raspberry cheesecake with a vanilla cheesecake filling.

4. You can make your own raspberry powder by dehydrating fresh raspberries. Once the raspberries are dehydrated a quick spin through a food processor or high-speed blender powderizes the raspberries easily.

1. Use your favorite granular or powdered sweetener. You can also use liquid stevia in this recipe if that's your thing.

1. Use room temperature eggs and cream cheese to make the cheesecake filling. Using warm ingredients does help to prevent cracks.

2. Make sure you cover your pan with a double layer of tinfoil to prevent over-browning the crust and edges of the raspberry cheesecake. The tin foil stays on the pan through the entire baking time.

3. If your cheesecakes have a tendency to crack, skip the springform pan and use a high walled tart pan. That's what I started to do and I haven't had to mess around with a bain-marie and my cheesecakes so far have remained crack free.

Is this recipe too high in carbs for you? Here are some suggestions

1. Leaving the raspberries out of the cheesecake filling will save 2 net carbs per slice.

2. Leaving off the sour cream layer will save .7 net carbs per slice

3. Leaving the raspberries off the top will save 2 net carbs per slice.

As an Amazon Associate and member of other affiliate programs, I earn from qualifying purchases.

Nutritional information for the recipe is provided as a courtesy and is approximate only. We cannot guarantee the accuracy of the nutritional information given for any recipe on this site. Erythritol carbs (and sugar alcohols) are not included in carb counts as it has been shown not to impact blood sugar. Net carbs are the total carbs minus fibre.

Did you make this recipe? 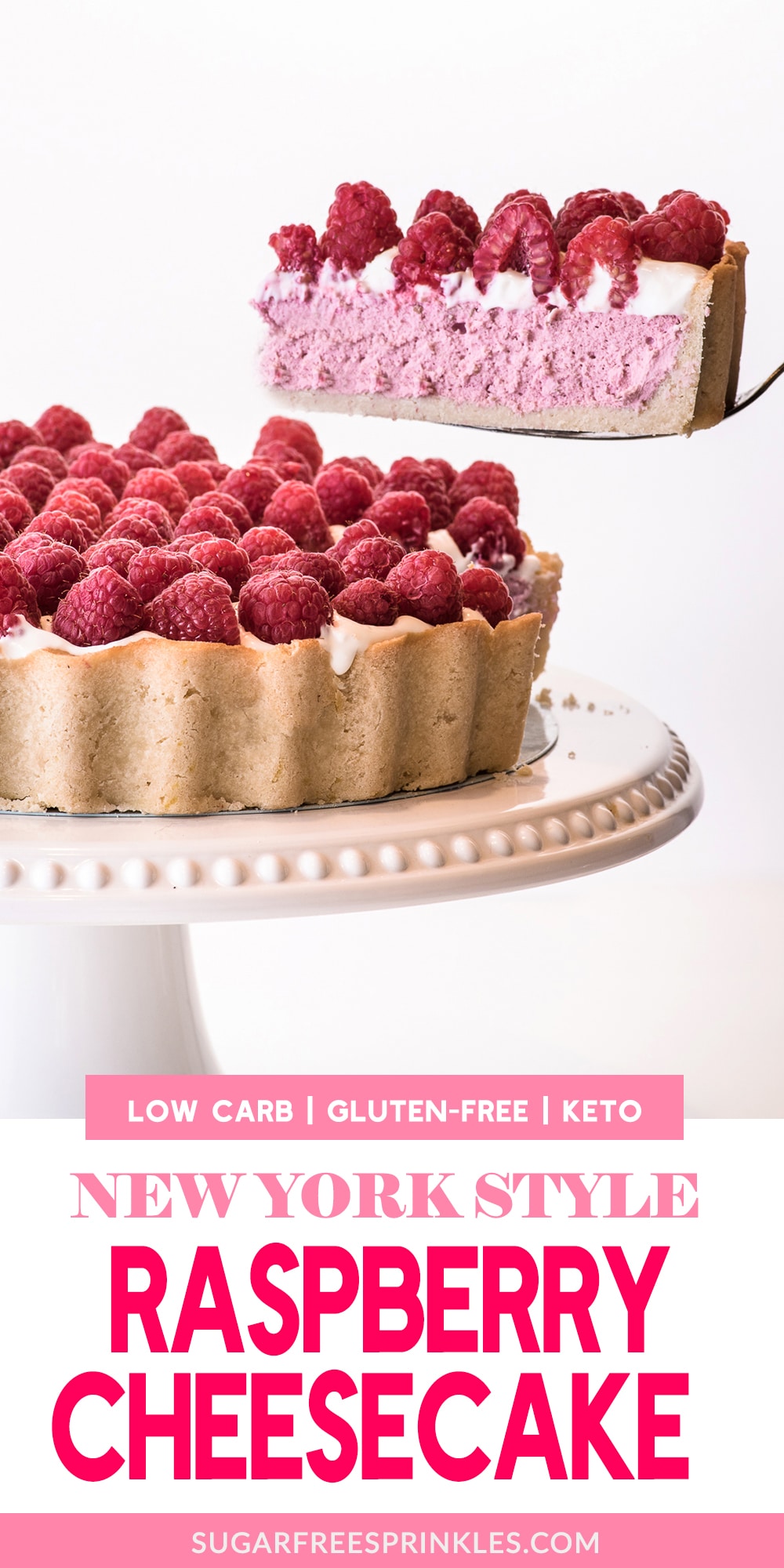 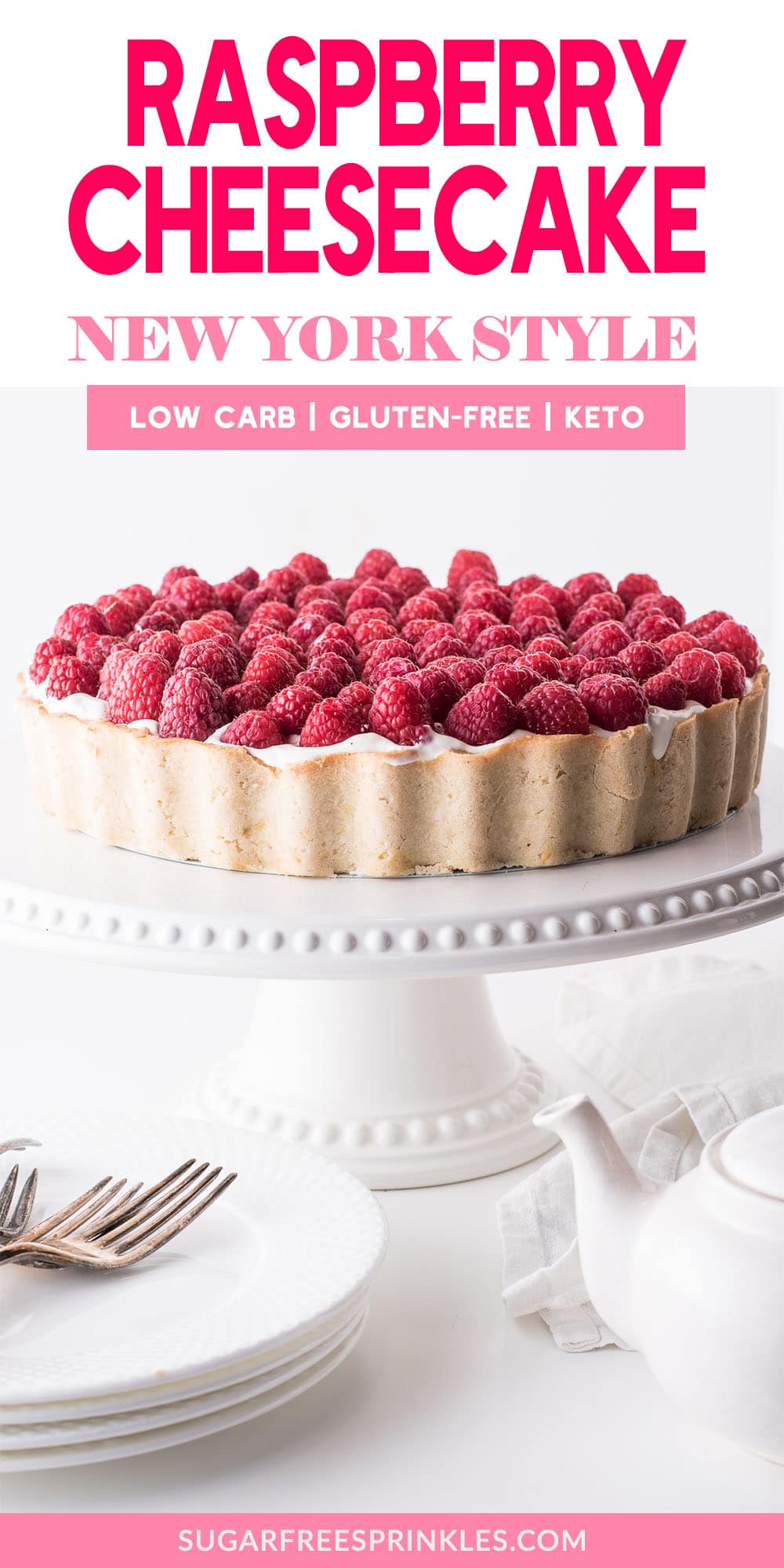