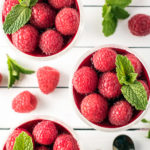 This raspberry panna cotta recipe takes absolutely no time to pull together and makes for a tasty end to any dinner.

When I say “no time to pull together” you could make these and have them in your fridge in about 15 minutes flat.   They also gel up in under an hour. If you’re looking for a quick dessert that still looks pretty fantastic, this could be the one. 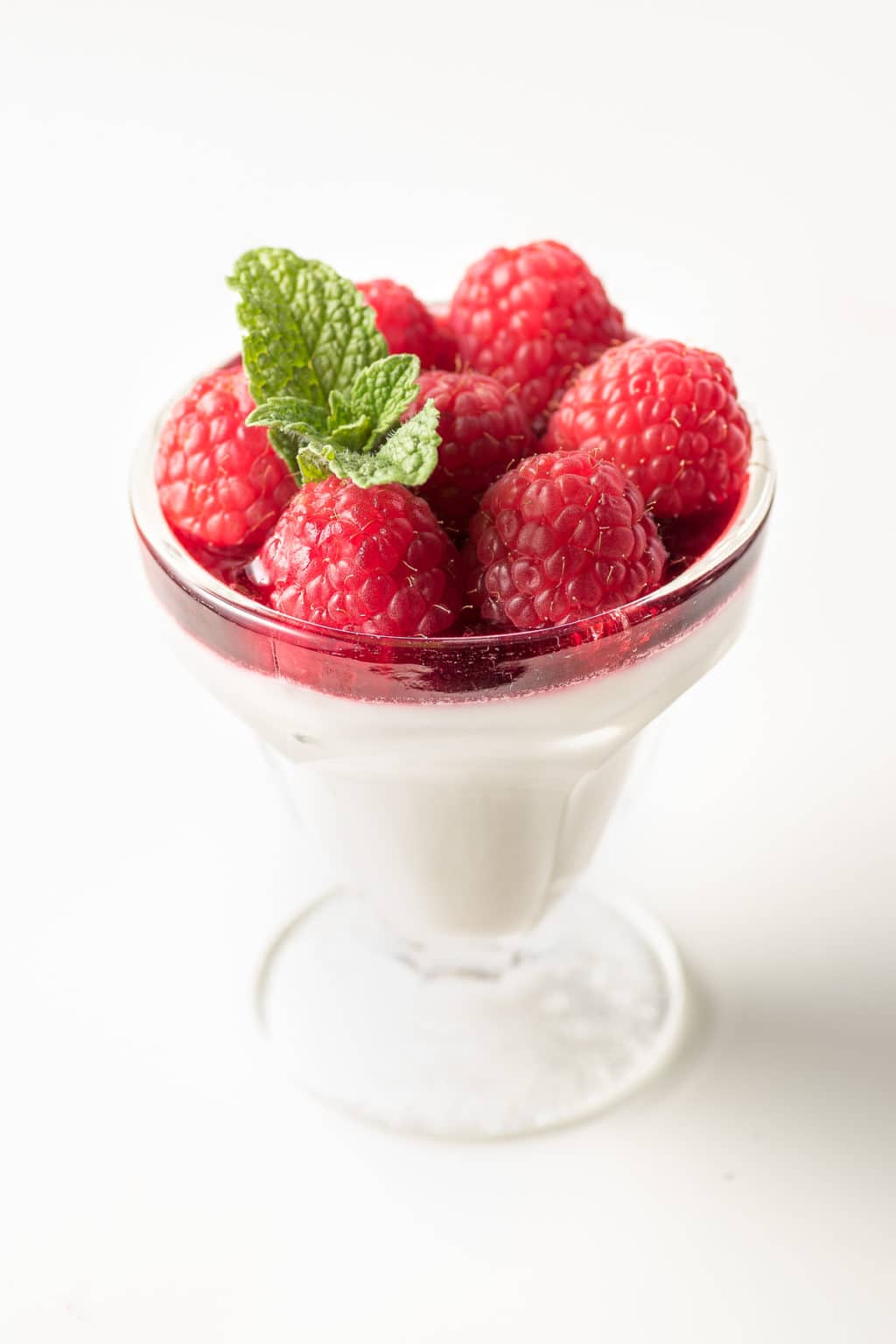 A simple raspberry panna cotta made with coconut milk

Panna cotta is traditionally made with heavy cream, so if you don’t like coconut milk you could go the other way and just make it with the cream instead.  But be aware it will change the nutritional value.

This recipe is also low carb, keto-friendly (if it fits your macros for the day) and naturally gluten-free!   It’s also a high-fat recipe, so it will keep you full.  I actually snacked on these for breakfast a few times this week and found them to be quite satiating. 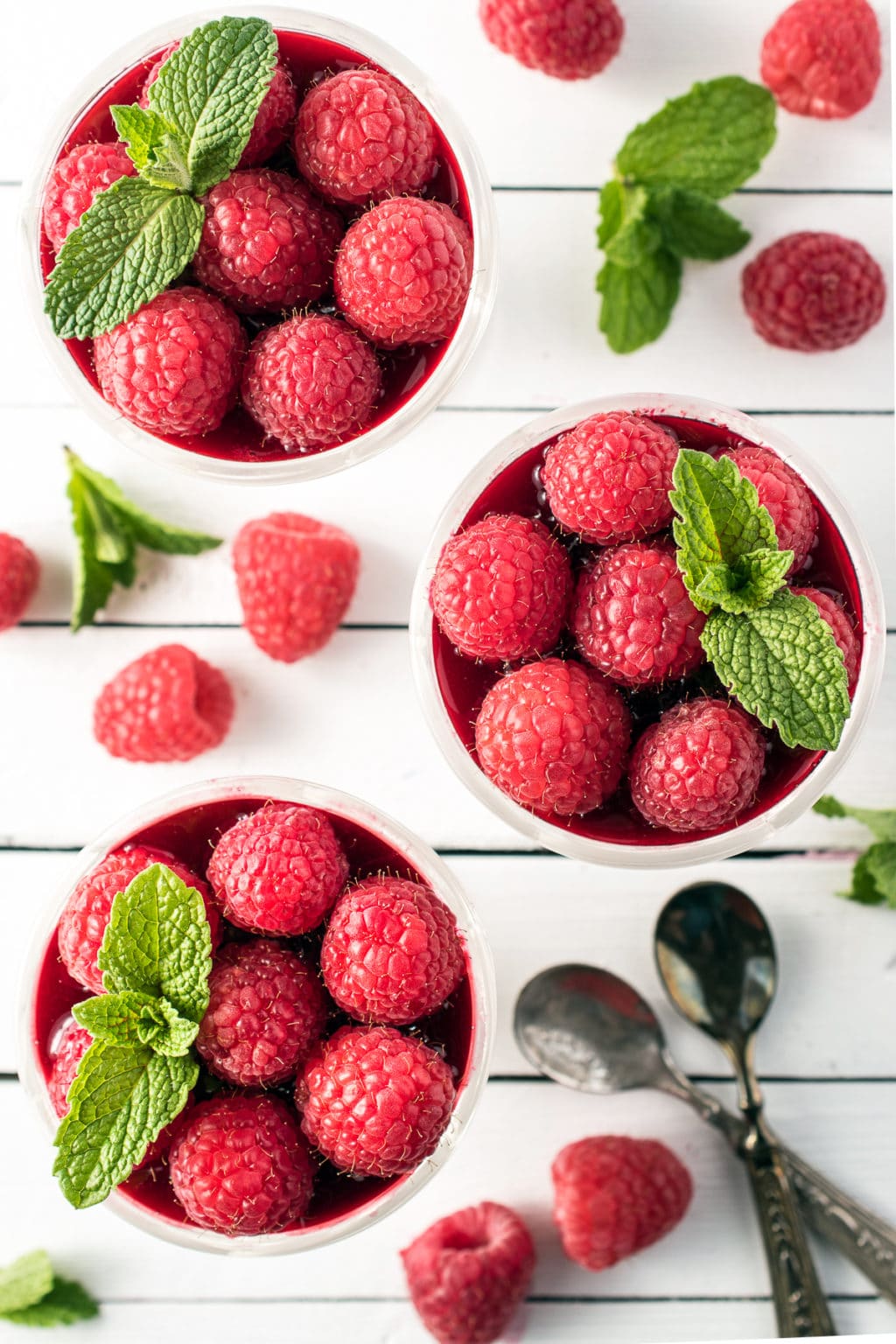 A bit about the coconut milk

So I used coconut milk in this recipe, and it works just like heavy cream.  The only thing different is that the texture of the coconut milk will change based on temperature.

If you pull this out of the fridge and eat it immediately (which I highly recommend, just gobble that down when no one is looking, I swear I won’t tell), it will be a bit thicker.   It will be a bit closer to jello, not quite as firm, but close.

If allowed to warm up a bit with room temperature you get a much softer dessert, much more like traditional pannacotta texture.

But don’t let the coconut milk turn you off, I actually think it tastes better than regular heavy cream does in this recipe.  It adds so much dimension!

The other thing to note is not all canned coconut milks are created equal.

I’ve tasted some horrible ones in my day for sure.   Since we live so remote, options for grabbing a can of coconut milk are limited.  But my local grocer carries Thai Kitchen here and I find that brand is pretty decent, and you can pretty much find it almost anywhere. 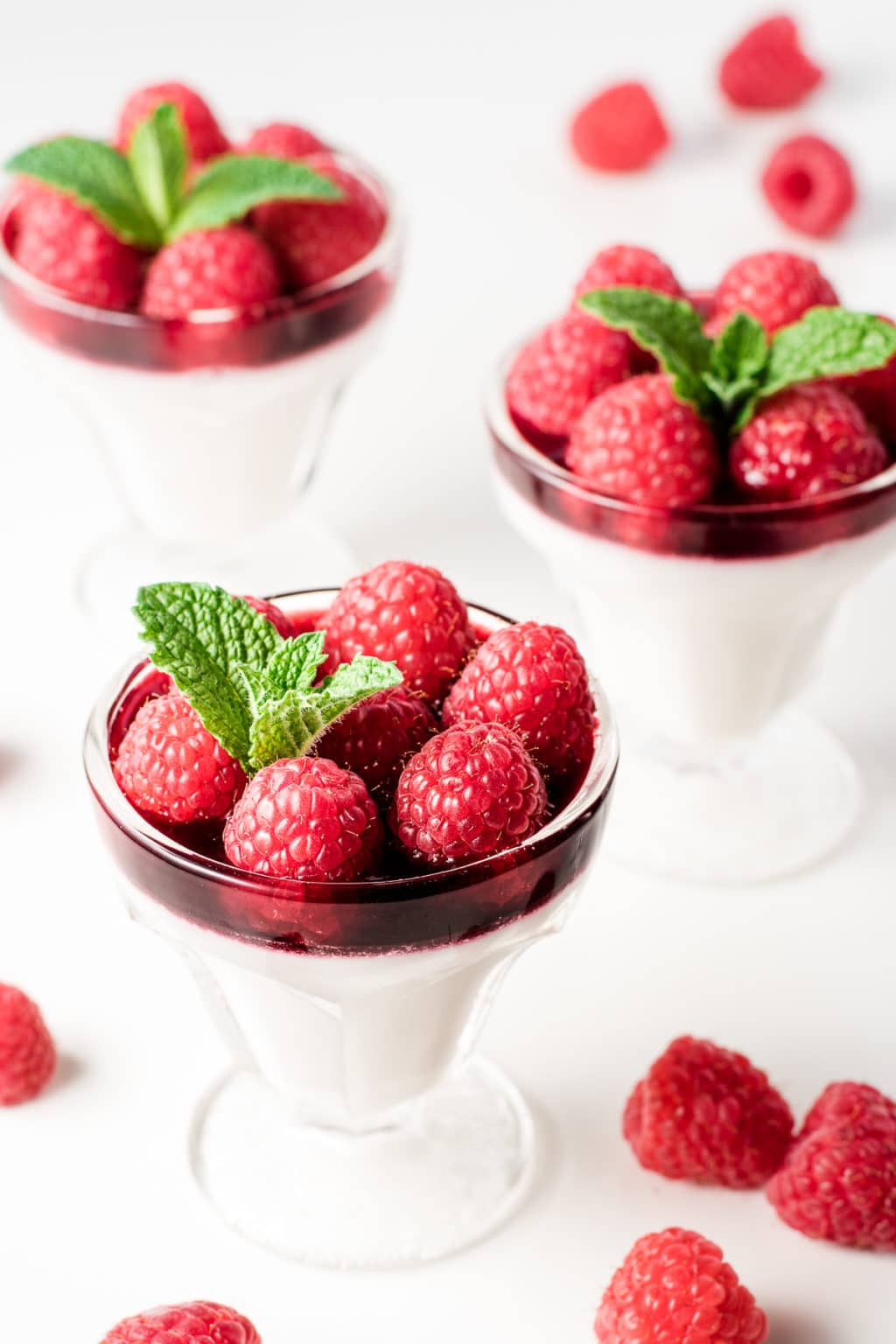 A bit about the sweeteners

For this recipe, I like allulose for the sweetener.  Allulose melts perfectly and does not get grainy at all when it gets cold.   I also find allulose has almost no aftertaste, and in this recipe my husband and marveled at how much it actually tasted like sugar.

The one thing to note about allulose is it is 70% as sweet as sugar, so if you do replace it with another sweetener, you will have a bit of math to do.

I tested this recipe as well with my favorite SO Nourished monk fruit erythritol blend powdered sweetener and it was good too, and I didn’t find that the recipe got terribly grainy after sitting in the fridge for 24 hours.

Xylitol and Erythritol did get grainy, however, and I found the raspberry panna cotta to be a bit grainy directly out of the fridge.  The graininess reduced greatly when the pannacotta was given a few minutes to warm up.

Stevia would work great too, just know that this recipe creates four 1/2 cup servings and adding stevia instead of a bulkier sweetener like allulose will reduce the volume of the final recipe.

Swerve also worked, but can I be honest, that super-duper cooling sensation from Swerve really ruins a lot of recipes for me.  I think Swerve is a lot like cilantro, some people really just don’t like it.  I think I am one of those people.  But if YOU like Swerve and that cooling sensation doesn’t at all bother you, I say you do you! 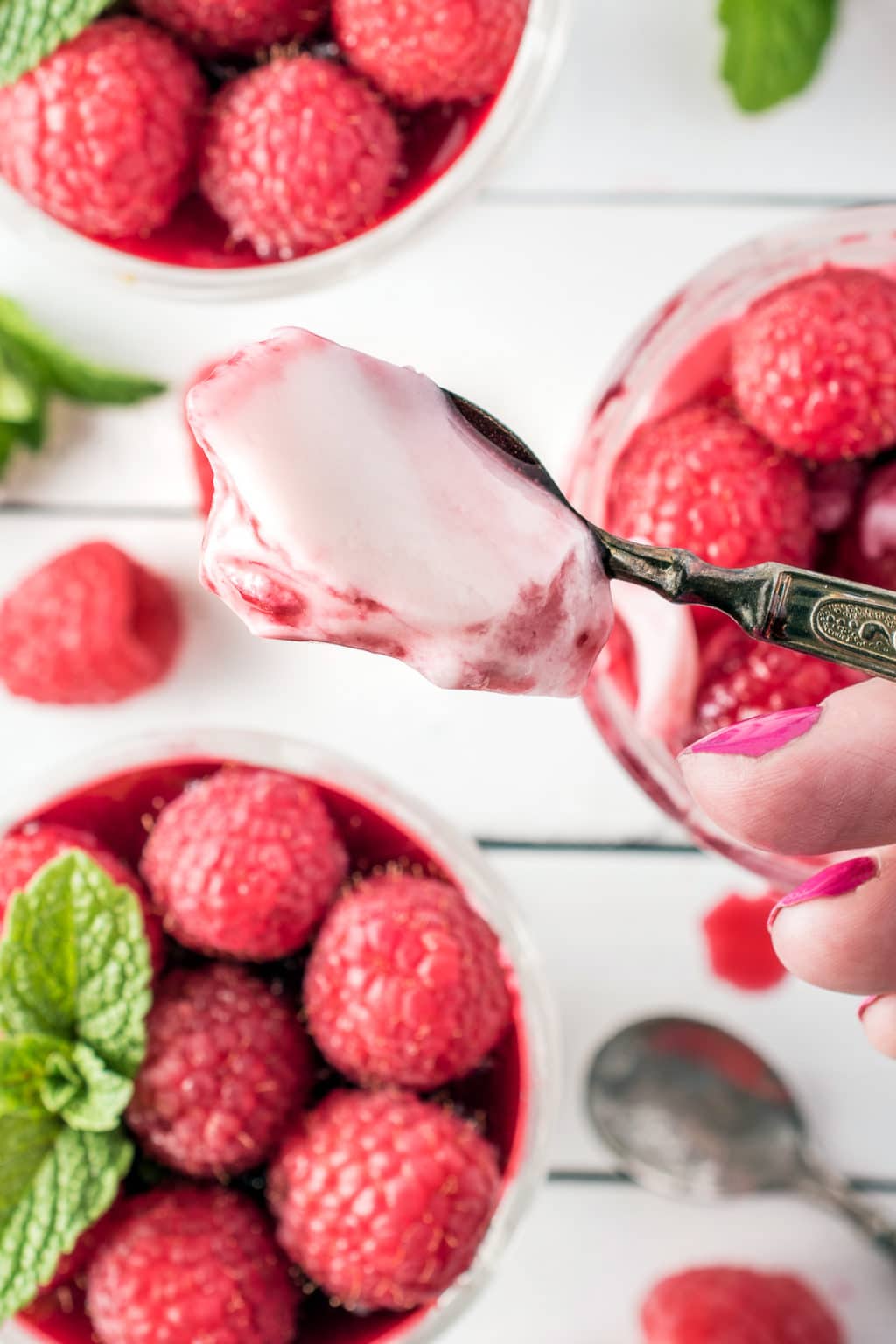 A quick bit about the raspberry topping

For the topping, I made a quick raspberry syrup with some fresh raspberries.  It’s runny like syrup and does not firm up.   The syrup pools and floods the pannacotta as you spoon it out.  This ensures every last bite gets a bit of that tart raspberry flavor.

And if you like raspberries like I do I have a few other recipes that you might enjoy, like these raspberry ripple ice cream bars, or my popular low carb Raspberry Zinger recipe (I had no idea they were raspberry zingers when I made them, they are actually English Madeleines, but I swear they taste just like the packaged pastry!) 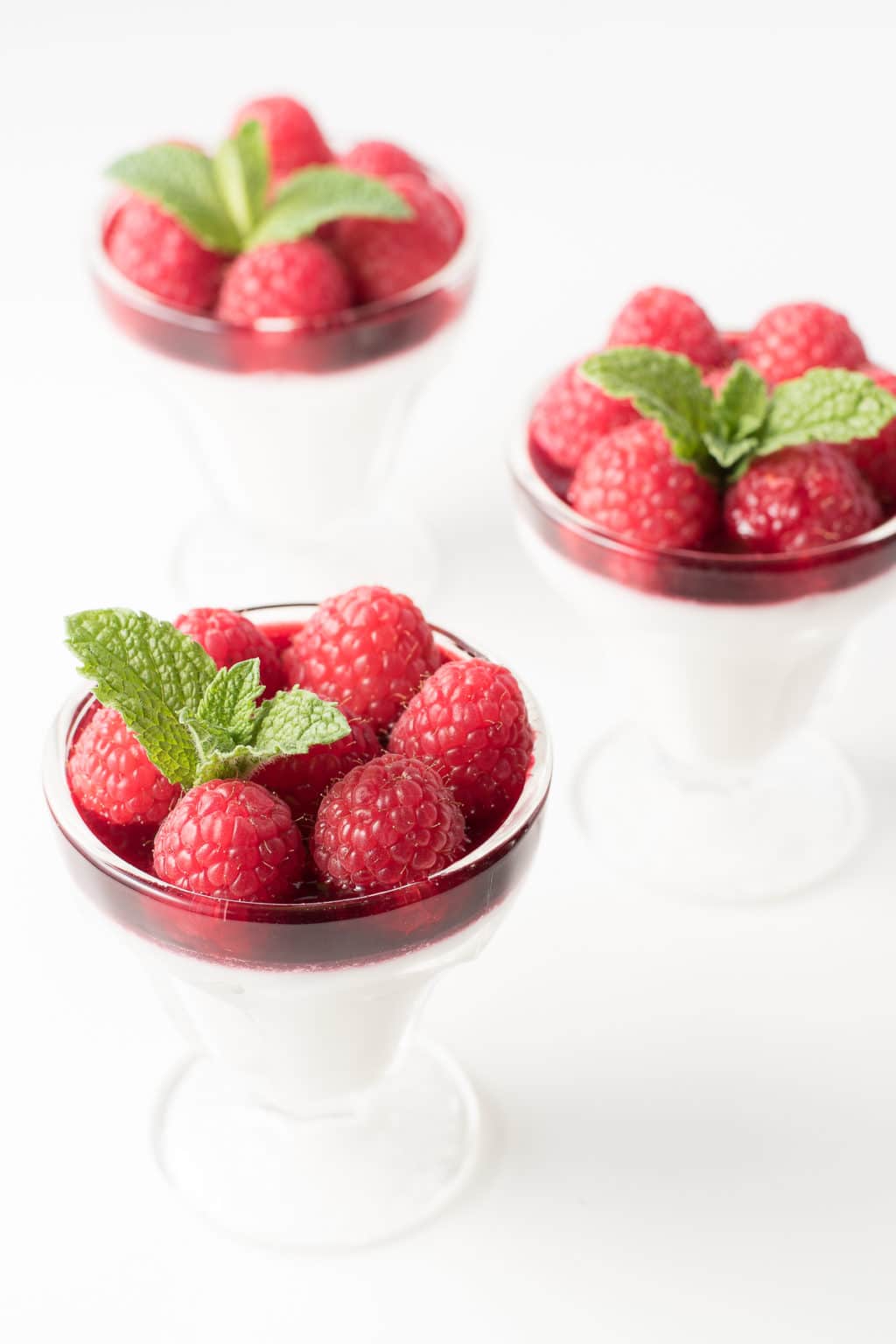 This keto raspberry panna cotta will need to be refrigerated and stored in the fridge until serving.  You can make it 24 hours in advance.  I wouldn’t add the fresh berries until serving to keep them from drying out and looking haggard.

I would also pull them out of the fridge a few minutes before serving to let them soften up a tiny bit.   This is completely discretionary, if you like your pannacotta on the softer side, warming them up will accomplish that.  If you like them a bit firmer, serve them up straight from the fridge.

This is a perfect low carb dessert to finish off a summer meal.  The fresh raspberries are all about summer, and the cool coconut cream is refreshing after a hot day in the sun. 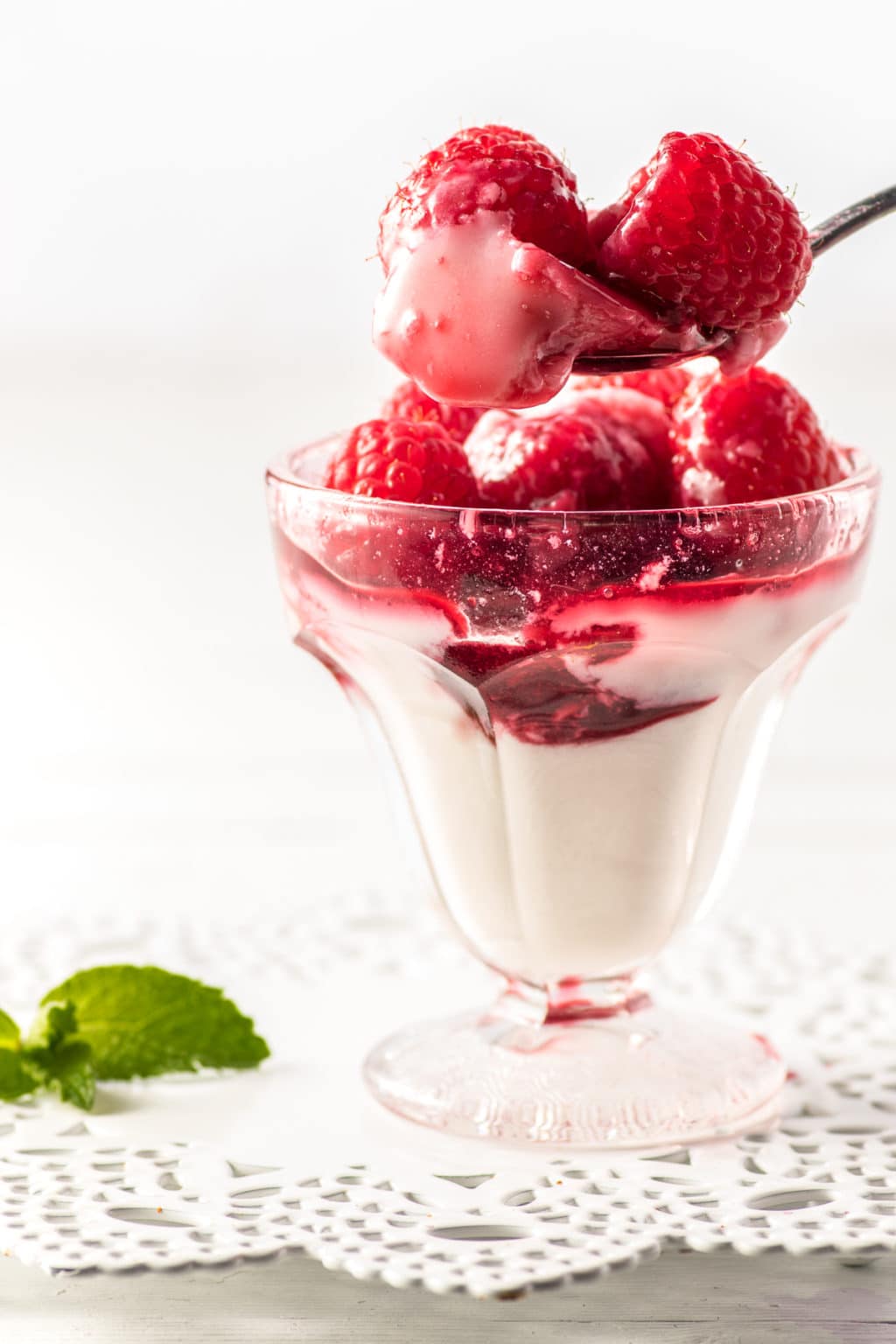 Yield: 4 Serving Size: 1
Amount Per Serving: Calories: 214Total Fat: 21gSaturated Fat: 19gTrans Fat: 0gUnsaturated Fat: 1gCholesterol: 0mgSodium: 14mgCarbohydrates: 7gFiber: 2gSugar: 2gProtein: 2g
Nutritional information for the recipe is provided as a courtesy and is approximate only. We cannot guarantee the accuracy of the nutritional information given for any recipe on this site. Erythritol carbs (and sugar alcohols) are not included in carb counts as it has been shown not to impact blood sugar. Net carbs are the total carbs minus fibre. 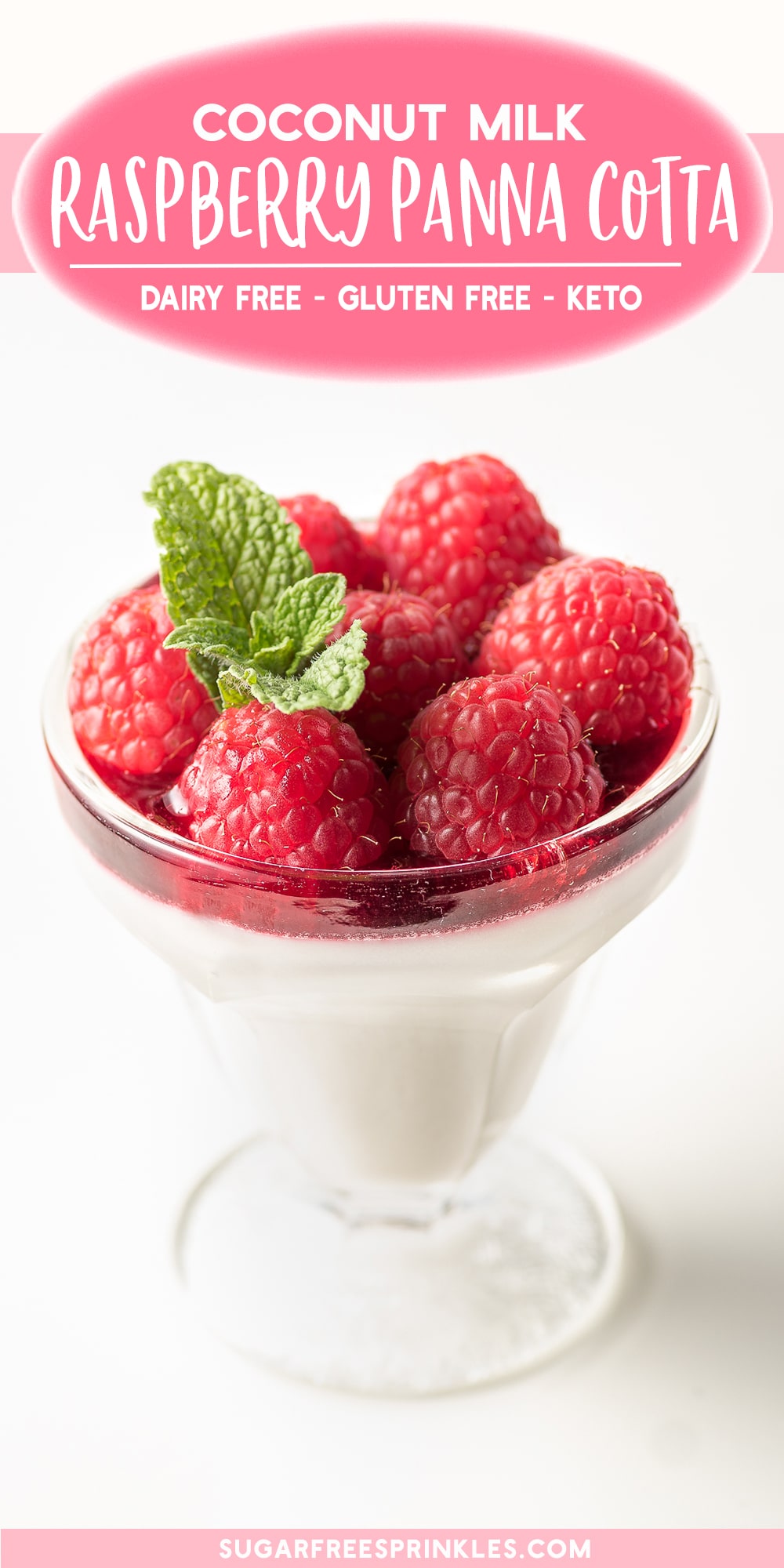